John Wayne confessed to the exchange during his final interview with Barbara Walters, which took place just a few months before his death.

During his last couple of decades, John Wayne’s health seriously deteriorated. The lifelong heavy smoker lived without one of his lungs and a couple of his ribs from the mid-1960s onwards, after being diagnosed with lung cancer. Nevertheless, Duke tenaciously battled on, playing roles he was too old, fat and physically challenged for. Relying on a toupee, makeup and a secret oxygen mask, he was eventually diagnosed with stomach cancer which he died of on June 11, 1979. Just six months prior, the Hollywood star gave his final interview in which he shared the best acting advice he’d ever received during one fiery altercation with a woman.

Wayne told Walters from his Newport Beach home: “I know I’m a good actor…I’ve been at it for 50 years, I must have learned something.” The interviewer, who died last month, asked the star who’s real was Marion Morrison: “Are you ‘John Wayne’? Rough, tough and a hard drinker? Soft with women and hard with men?”

Duke replied: “Yeah I think so. Yeah, I like to drink and I like women and I’ve probably been a lot softer than I should be on occasion with them. And a lot harder on some men, mainly myself.” On being somewhat typecast as a rough, macho cowboy and soldier throughout his career, the 71-year-old shared a story from World War II when he was shooting his first technicolour movie, The Shepherd of the Hills.

Wayne recalled: “What [my fans] come to expect of me, I try to be on the screen. I remember when I was a young man and we were making a picture in which Harry Carey was playing my father. It was Shepherd of the Hills. We’re talking about pictures and I was imbued with the idea that I wanted to play every kind of part. And I was explaining all this to the – what were then – kids and are now matured and half of them dead. But at least at that time, they were very young in the business and I saw Ali Carey, that’s Harry Carey’s wife, sitting over there. And they love men and had been very nice to me. When all these people left, she said, ‘You’re a big jerk.’ [Well actually] she didn’t say jerk because it was the language of a truck driver.”

Wayne continued: “I said, ‘What’s the matter?’ Harry Carey had just walked into the room and stood [with his hand on his other arm]. She said, ‘Would you like to see Harry Carey different?’ And I said, ‘No, of course not.’ And she said, ‘Well why don’t you wise up? The American people have taken you to their hearts and they expect a certain thing out of you. Don’t disappoint them!’ And I think that’s the best advice I was given in my life!”

Duke also confessed that he would occasionally watch some of his old movies, but found them annoying.

He added: “Occasionally. When there’s a real old movie like Wake of the Red Witch on the other night. I looked at that until I fell asleep. It’s kind of irritating to see. I was a good-looking 40-year-old man and suddenly I can look over here and there’s this 71-year-old. You kind of think, ‘God it was pretty wonderful then.’” 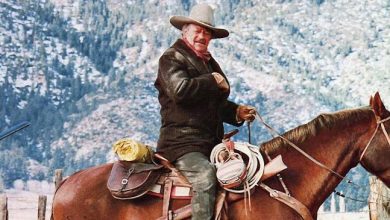 The Տһootıѕt: John Wayne rides off into the sunset in a blaze of glory 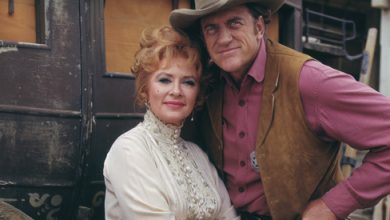 Amanda Blake knew the role of Miss Kitty on Gunsmoke was a special one, therefore she refused to allow the television show’s decision-makers to keep her from auditioning 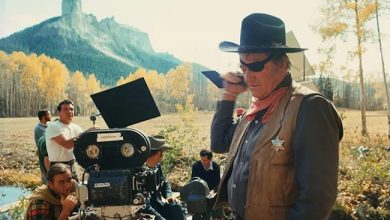