Without a doubt, it was a bit intimidating interviewing one of the most ruthless screen adversaries to ever cross paths with the iconic John Wayne. It became perfectly evident right off the bat that Gregg Palmer was a gentle, cuddly bear, albeit one with a booming radio announcer’s intonation.

Discovered in 1949 after a producer accidentally heard his rich baritone delivering the news in San Francisco, Palmer headed to Hollywood and never looked back. An uncredited bit part in one of Dean Martin and Jerry Lewis’s earliest films, My Friend Irma Goes West, became Palmer’s film debut.

Serendipitously, within months of arriving in Tinseltown, Universal Studios scooped up the fresh-faced, handsome young actor for a five-year contract exemplified by military action, drama, crime potboilers, romantic escapades, and Westerns.
While his prolific Universal stint didn’t catapult the burly actor into leading man territory, Palmer did hone his craft with such future stars as Rock Hudson [Magnificent Obsession], Tony Curtis [The All American], Audie Murphy [To Hell and Back, Universal’s top grosser until Jaws’ sudden impact 20 years later], and Clint Eastwood. The Creature Walks Among Us, a shining example of the low budget monster mania that swept America’s Eisenhower era, wrapped up Palmer’s Universal tenure.

But forays into the Western genre became the journeyman actor’s true bread and butter over a 30-year celluloid career. The Rare Breed with James Stewart and Maureen O’Hara, guest spots on Gunsmoke [an astonishing 21 episodes available on Paramount’s meticulously assembled Gunsmoke: The Complete Series], Bonanza, The Virginian, and six films with John Wayne — all Westerns — enabled the actor to make countless appearances at cowboy festivals in modern times.
As he grew older, the actor seamlessly transformed his persona into the consummate bad guy, exemplified by an unkempt, unruly beard and matched by a towering build. Unfortunately, a painful knee injury on the set of the Civil War miniseries The Blue and the Gray precipitated his early retirement in 1982.
Palmer first met the Duke while on a date with Oscar-nominated actress Ann Blyth [i.e. Mildred Pierce, starring Joan Crawford], but the duo would not work together until nearly a decade later in The Comancheros.

By far, Big Jake contains the actor’s best work with Wayne. In it, the 6’4″, 300-pound Palmer memorably plays a vicious machete-brandishing villain who kills Big Jake’s dog and threatens his grandson’s life with near deadly results. For this writer, witnessing Palmer’s performance as an eight-year-old impressionable kid was downright scary.
The Shootist, the Duke’s final film incidentally directed by Clint Eastwood’s mentor Don Siegel, found Palmer setting the elderly gunfighter’s last hurrah in motion via a bold highway robbery that quickly went south in the opening frame.

Without further ado, sit back and enjoy Palmer’s heartfelt recollections of what it was like to work with Wayne, an actor whose staggering popularity continues to confound his detractors while remaining the quintessential genuine article to his legions of fans.
Plenty of tantalizing anecdotes you don’t want to miss include “Grizzly” — Wayne’s nickname for his buddy — playing chess in Durango with the cheating star, why he nearly passed on accepting a cameo in The Shootist, teaching the Duke’s youngest son Ethan how to properly spit watermelon seeds, and the day Palmer had trouble pronouncing a seemingly straightforward word on the set of Chisum.
Stick around for further tales of Palmer’s distinguished World War II service, favorite roles, traveling to Rome for a pair of rip-roarin’ Spaghetti Westerns, whether sagebrush sagas can mount a comeback, and the secret to maintaining steady work in the business of show.
Palmer regrettably passed away at age 88 on October 31, 2015, at the Providence Tarzana Medical Center in Los Angeles. This phone interview was conducted two years prior on June 11, 2013, while the charitable octogenarian was enroute to the Van Nuys, California, airport to make his fourth and final appearance at the Memphis Film Festival.

I grew up in San Francisco. When I graduated from high school, I immediately enlisted in the Army Air Corps in 1944. I was 17 years of age. World War II was almost over when I joined — fortunately I got in on the tail end of the fighting. I became a cryptographer, which meant I intercepted and decoded enemy messages. I rose to the rank of sergeant and was discharged in 1946.
When I got out of the service I thought I would go back to school and become a corporate attorney. I didn’t plan on going into radio, but a friend of mine was trying to get in and he convinced me to give it a try. That was a long time ago [laughs].
A producer at KNBC in San Francisco heard me reading the news. Apparently he liked what he heard. I was blessed with a deep voice. It took them eight months to talk me into coming to Hollywood. Next thing you know you’re meeting people and making a screen test.

The first movie I worked in was My Friend Irma Goes West in 1950. I played an uncredited ambulance attendant. It was Dean Martin and Jerry Lewis’ second film. If you can believe it, John Lund and Marie Windsor were billed over the comedy team. A year later I had a minor part in That’s My Boy, another Martin and Lewis film.
Universal put me under contract in 1951, and I stayed there for about five years. I made three films at the studio with Audie Murphy, still one of my favorites. The films were The Cimarron Kid, Column South, and To Hell and Back. Audie and I reunited a decade later for The Quick Gun, produced for Columbia.
I received a special “Introducing Palmer Lee” billing in Column South. Palmer Lee is my given name. Universal built me up as a romantic leading man, even convincing me to change my name in time for the 1954 shoot-‘em-up, Taza, Son of Cochise, starring Rock Hudson. However, the studio’s plans for me never really materialized.
I started freelancing after that. If you have a computer and visit my IMDB page, you can easily see all of my credits. I don’t have a computer — I don’t fool with one because they send you all kinds of emails or whatever. 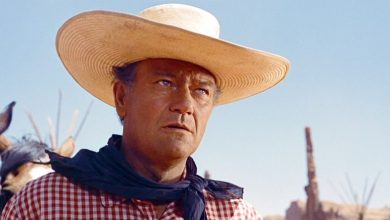 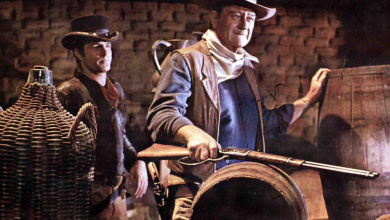 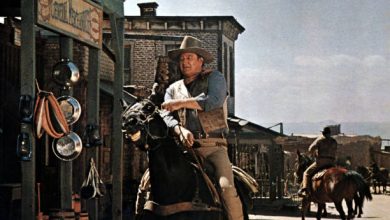 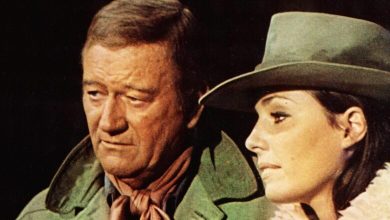